Many years ago three guys from springs found and promptly became obsessed with Brazilian Jiu Jitsu.

They traveled far and wide (to Johannesburg) every week to train and feed their ever growing obsession.

Many years later, Kyle Hedrikz, Joh-Paul Meeser and I are fortunate enough to be called the founding members of Arte Suave Brazilian jiu Jitsu.

Approximately one year before we opened the first club in Springs, Kyle wrote on my white board “Arte Suave – Are you thinking” basically making him the OG of Arte Suave.

For many months I left this on my board as a reminder of what the dream was – to open a club and share the beauty and art of Brazilian Jiu Jitsu.

When the opportunity came to finally open our club the name Arte Suave was the obvious choice as was the coaching team.

Unfortunately, life sometimes gets in the way of Jiu Jitsu, and Kyle was offered the opportunity to relocate to George with his amazing wife Mikaila, he also started a family with the birth of their daughter Gracie.

This was a terrible loss for the club as Kyle (in addition to being a monster OTM) is one of the most technical purple belts we have ever had the pleasure of sharing the mats with.

His coaching ability and mat maturity has always been way above his actual belt level and many times I found myself in awe of just how well he could articulate and breakdown techniques when coaching.

Just over a year later and we have come full circle… we are ecstatic to announce that Arte Suave George is officially born headed by the bearded wonder himself.

PS. It is rumored that at one point JP and Kyle actually trained spitting Llama’s to fight, these rumors can neither be confirmed nor denied. 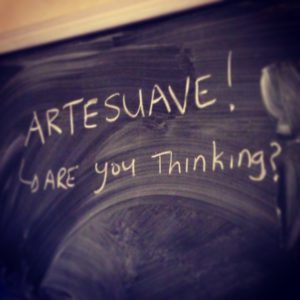 Looking Back To White Belt 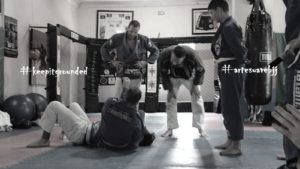 The Enso, or Zen circle, is one of the most appealing themes in Zen art.

The Enso itself is a universal symbol of wholeness and completion, strength and elegance and the cyclical nature of existence, and for us this relates very well to our Brazilian Jiu Jitsu Journey.

Each respective belt represents a step towards a better understanding of who we are and the search for the perfect balance in our games. It is a testament to the dedication and devotion shown towards the art of BJJ and our personal development. In turn, each belt stamps its own identity and requirements on us as we mature through the BJJ ranks.

When drawn, the circle may be open or closed.

When drawn open the Enso circle is incomplete, allowing for movement and development. Zen practitioners relate the idea to wabi sabi, the beauty of imperfection.

When the circle is closed, it represents perfection.

Our open Enso represents the beauty of having the lifelong pursuit of an unattainable goal, which of course is the mastery of Brazilian Jiu Jitsu.